Discover the mobility of the future as you play!

Airbag, child seat or even electric car. You've heard it all before! But have you heard of cars that are also able to drive all by themselves? At the Mercedes-Benz Gallery in Berlin children are given an insight into what adults like to call the "mobility of the future". Two schoolgirls, Liv and Rosa tried it out for us.

Summer in Berlin. At the street "Unter den Linden" the thermometer reads 35 degrees in the shade. Not so in the Mercedes-Benz Gallery. Here it is pleasantly cool, as Liv (aged 12) and Rosa (aged 11) immediately notice when visiting the Mercedes-Benz Gallery in Berlin. The two girls are here on behalf of MobileKids.net. They are visiting the Mercedes-Benz Gallery for the kids’ discovery tour, which has a mysterious concept in store: attractively designed glass showcases conceal so-called light points, which the kids can illuminate with special torches. These give them interesting information on different aspects of driving. What exactly there is to be discovered is not revealed at first. Full of expectancy, Liv and Rosa follow the light points.

Kids’ discovery tour - what will the mobility of the future look like?

A total of five stations are to be found on the two levels of the Mercedes-Benz Gallery in Berlin. At each station the kids are asked a quiz question, enabling them to test their newly acquired knowledge. The first topic is "Guardian angels on board", where the kids learn more about the familiar airbag and the less familiar drowsiness warning system. The topic of "Pedestrian recognition" is also addressed. This introduces them to special cameras that recognize pedestrians on the road, for example. A second station entitled "Clever combination" covers the topic of hybrid cars and explains their advantages. It is followed by the third station, "Sun in the tank", which covers the subject of electric cars. The fourth station then entices with the title "Copying allowed". This has little to do with copying from your neighbour at school, but rather refers to the clever solutions that automobile engineers and other researchers are able to copy from nature. Liv and Rosa learn that the velcro fastening was inspired by the burdock, for example. The fifth and final station is a look into the future. A car that drives all by itself, while the occupants relax and read the newspaper or play games? Liv and Rosa would never have thought that this might soon be possible. Their verdict: The Mercedes-Benz discovery tour is very interesting, and they would have enjoyed staying even longer.

Discover the mobility of the future as you play! The Mercedes-Benz Gallery in Berlin invites children to a discovery tour. 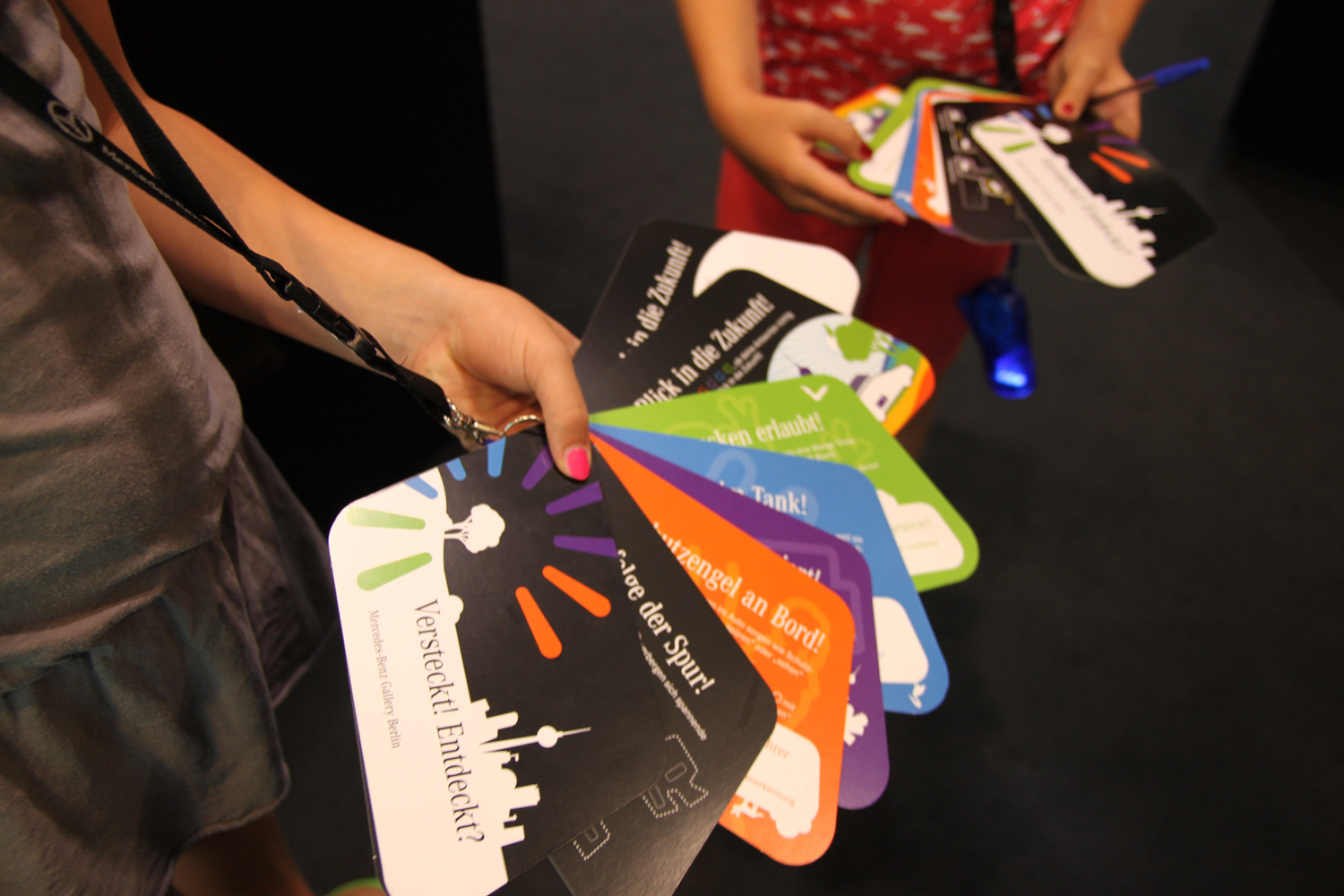 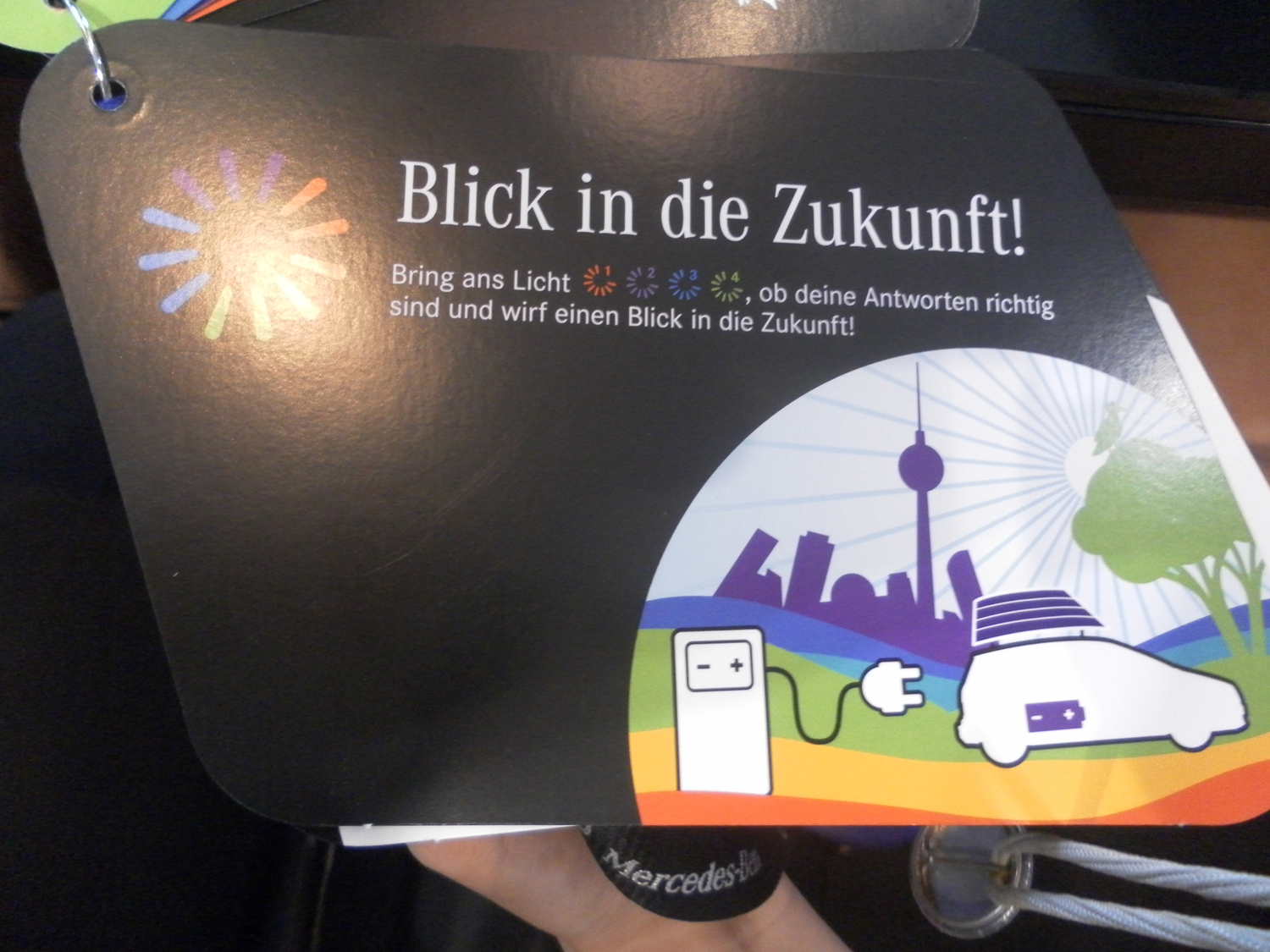 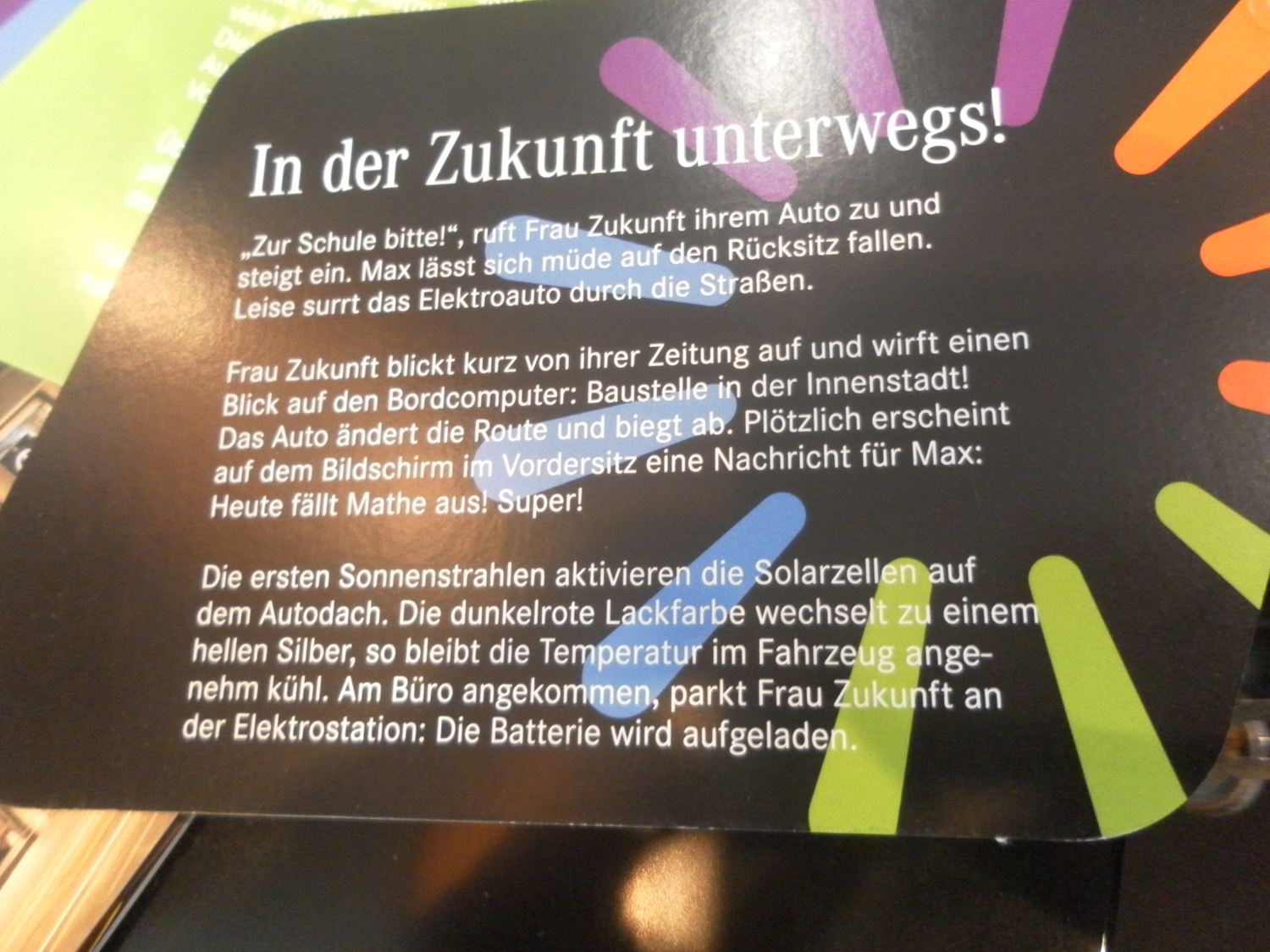 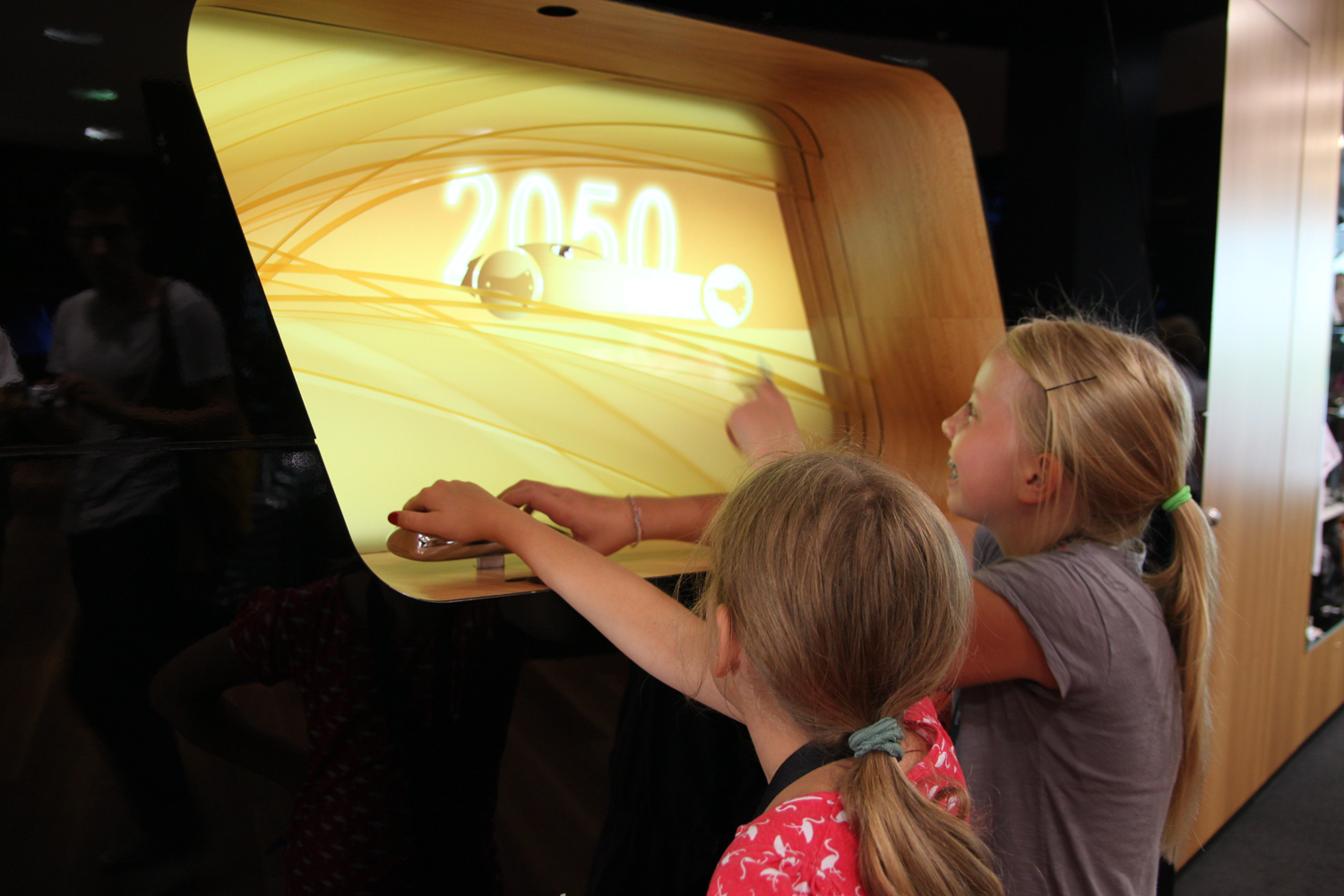 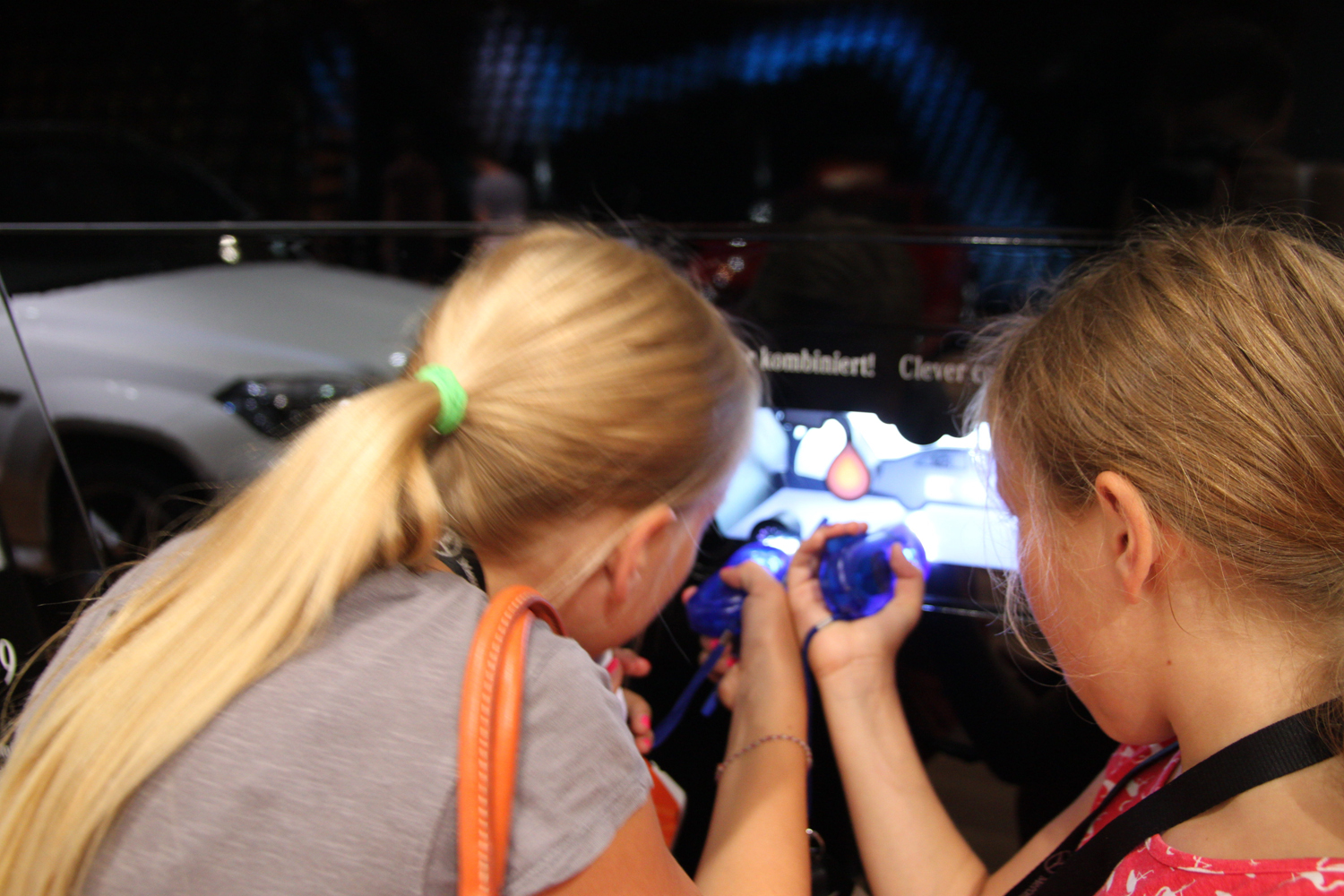 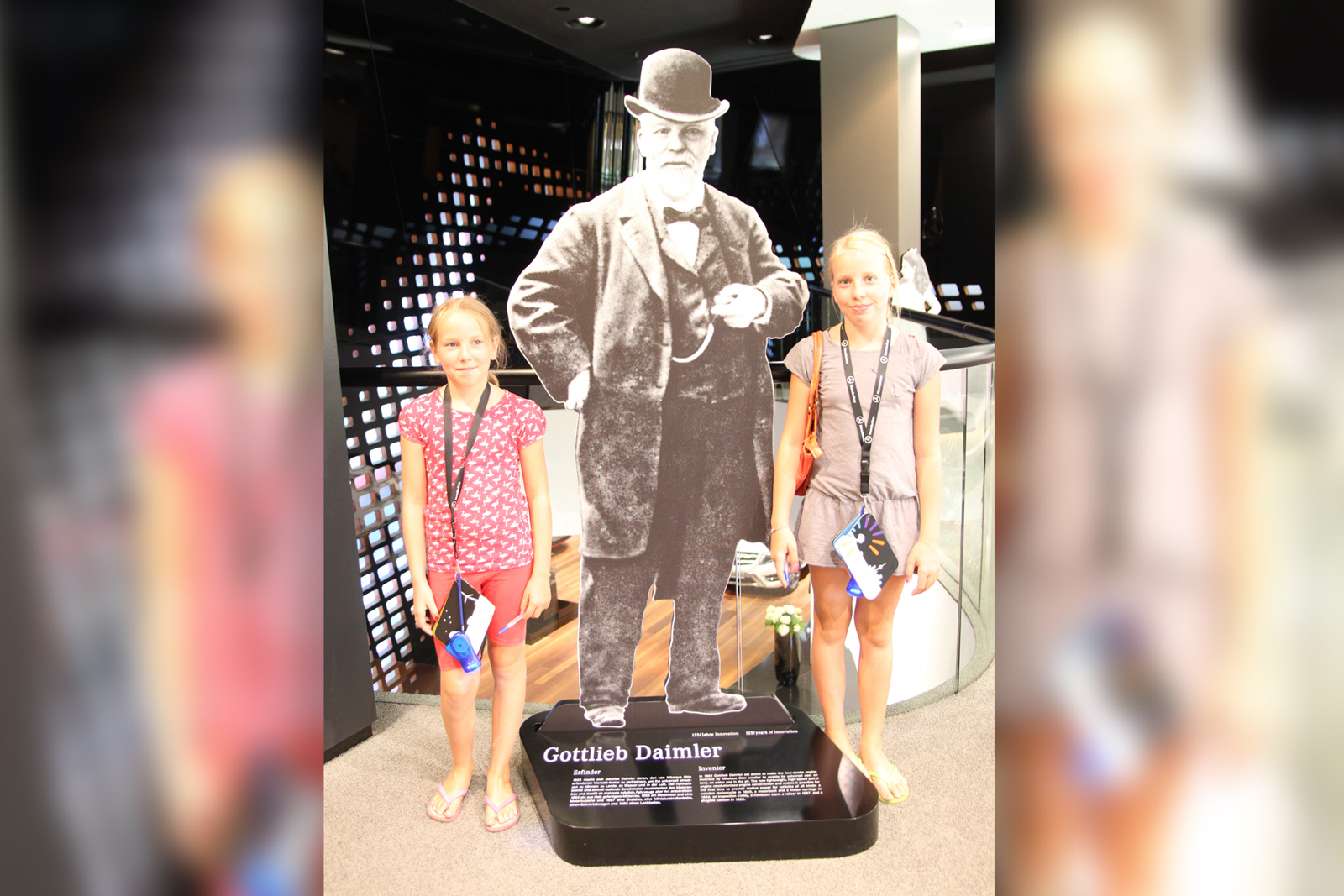 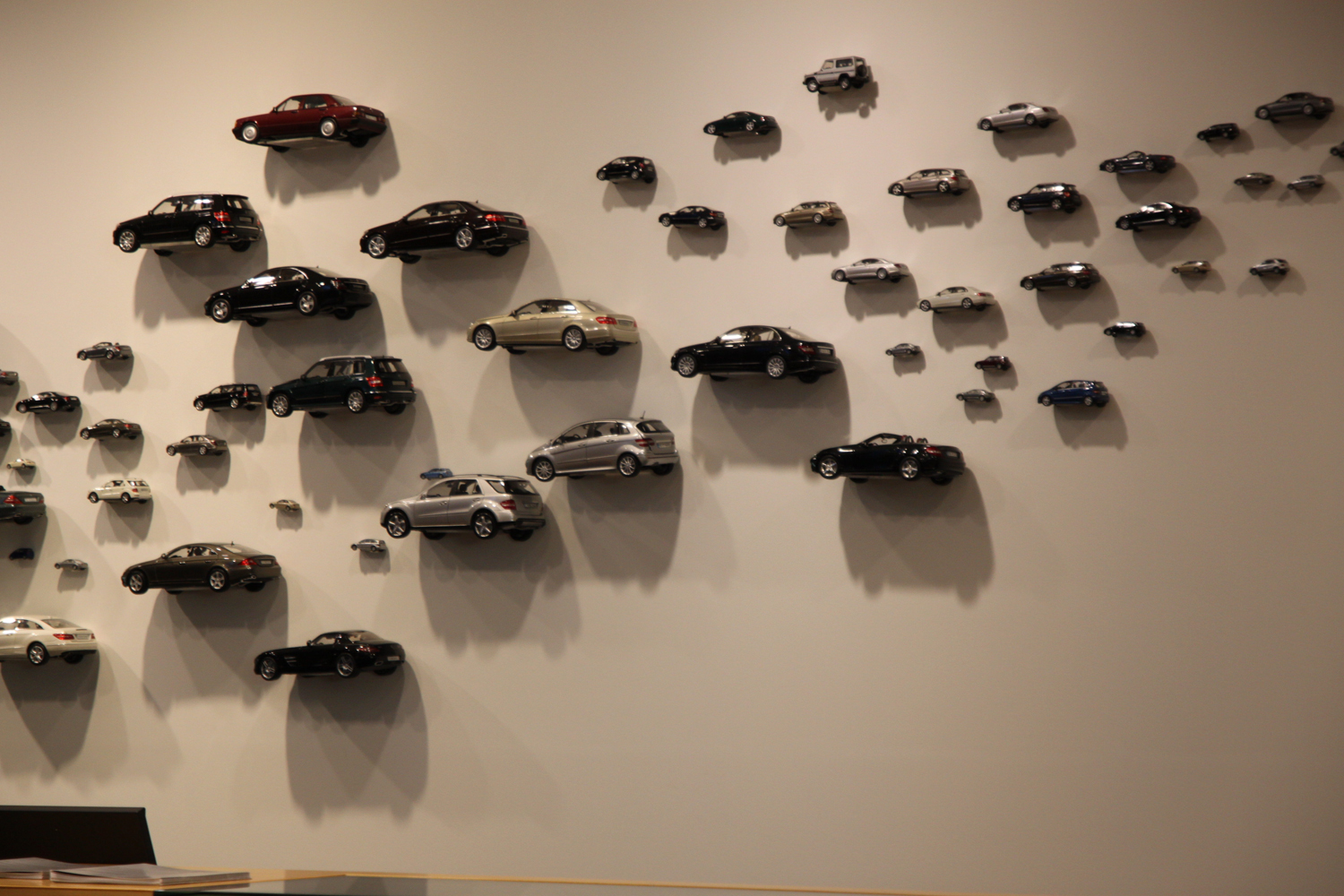 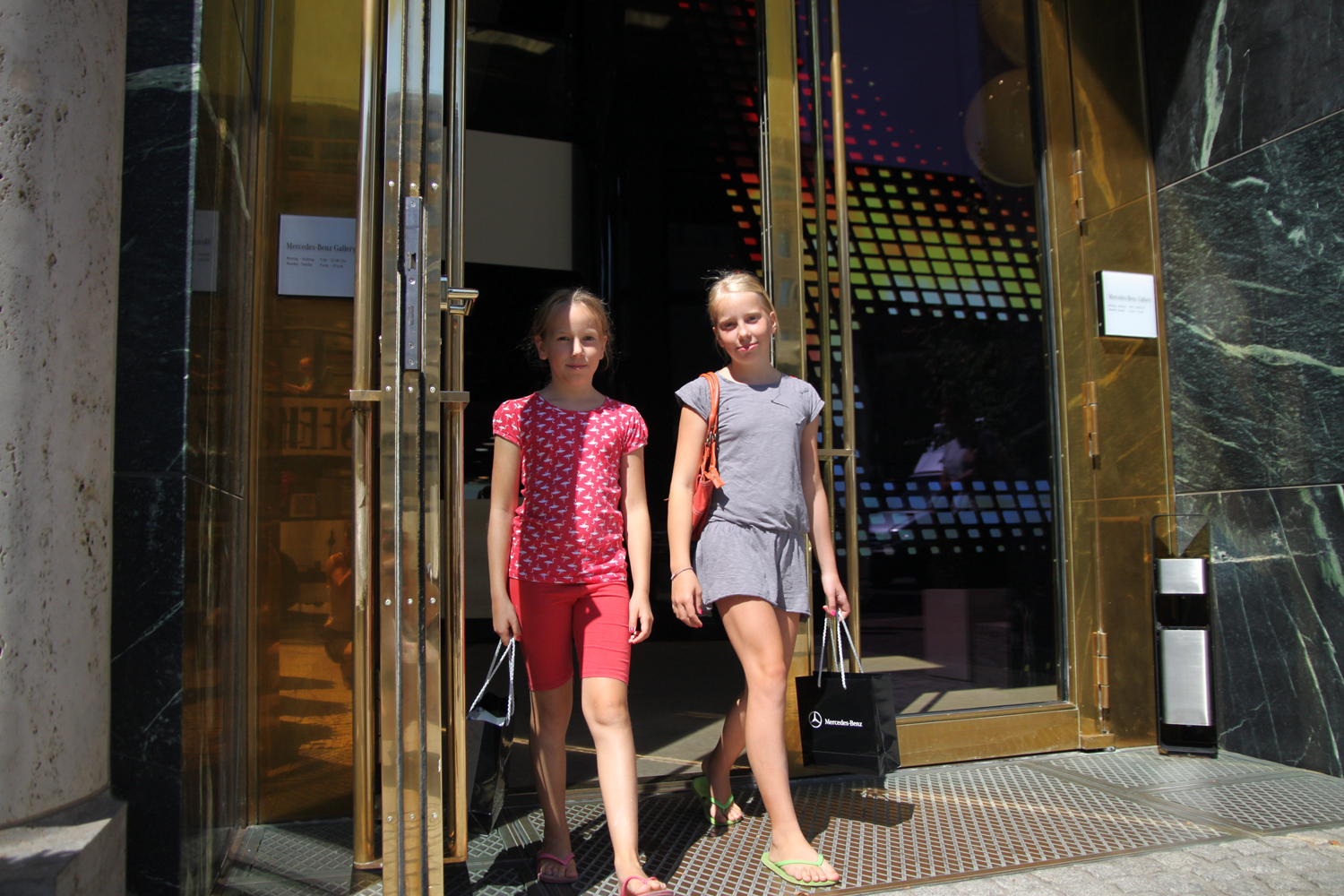 "It's really nice here, but how do you get all the cars into the building?"

Naturally the kids’ discovery tour is by no means all there is to see in the Mercedes-Benz Gallery. With varying vehicle presentations, displays, events, a boutique with numerous accessories and a restaurant, a venue has been created for many – not only for those who are fans of the car with the star. The Mercedes-Benz Gallery also provides an insight into the history of the automobile. A chronology along the walls shows technical developments since the early years at the end of the 19th century to the present day. Liv and Rosa also enjoyed seeing this and the many interesting vehicles on display.

On the subject of the vehicles on display, one question naturally occurred to the two girls at once: how do they get all these cars in here? The guesswork began. Theory number one: the cars are shrunk beforehand? Second try: the cars were assembled when already inside? Third attempt: perhaps there is a lift for the cars? In fact the third idea comes fairly close. On enquiring further, the girls found out that a special cable hoist almost invisibly installed in the ceiling lifts the cars from the ground floor to the first floor. Prior to this, the vehicles must however be maneuvered through the entrance with millimetre precision. This is not for the fainthearted - after all, a scratch on the precious bodywork would be unforgiveable. Liv and Rosa were certainly impressed, though their shrinking theory might also have something to it. In a happy mood and armed with small gifts, they made their way home again.

Kids’ discovery tour at the Mercedes-Benz Gallery in Berlin

It was on January 1st 1909 that the new "Daimler-Motorengesellschaft AG Berlin Subsidiary” first moved into a building on "Unter den Linden". Now Mercedes-Benz has returned to this historic location. The car showroom with the discovery tour is open to children of all ages.