It isn't difficult to integrate road safety into the school day. Participants in the MobileKids school campaign do this year after year.

In summer inline skating is an all-too popular pastime among children and youngsters. But parents worry that falls could result in minor and even major injuries. It's important that children know how to skate safely before venturing out into the street.

One of the prize-winning schools in the MobileKids School Campaign, Bodelschwinghschule in Rheine, taught its primary-aged pupils how to stay safe on their inline skates. The project was divided up into six units, each taking up two hours of teaching time. This was a subject where the pupils' attention was guaranteed not to flag.

Safety first! The first unit was called "Protective gear and stopping without brakes". It began with putting on the full complement of protective gear, consisting of helmet, wrist guards, elbow pads and knee pads. Using role play, the children learned the techniques of falling to their knees and standing up again. The game was called "A Visit to the Zoo".

The backstory: the children are at the zoo, skating from one enclosure to the next. Suddenly a little monkey jumps out in front of them. It's too late to get out of the way. So the children have to sink to their knees quickly - no problem thanks to the protective clothing. 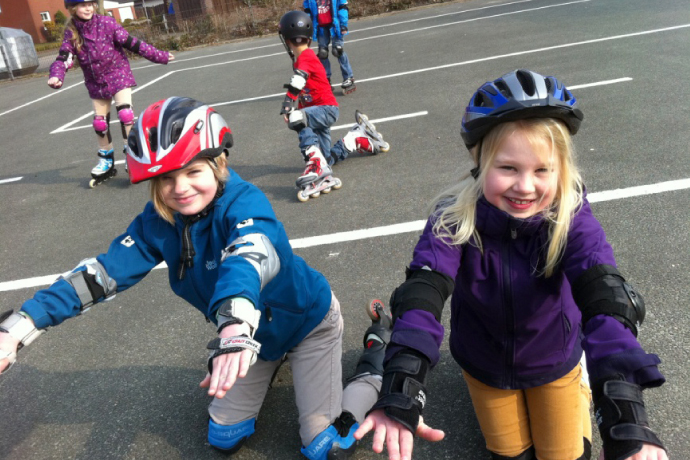 Falling, or rather landing, properly

The basics also include "cornering and falling techniques". Which is the title of the second unit. Here too the teaching only started once all of the children were wearing the full complement of protective clothing. There then followed a game called "The Postman on Wheels". The focus was on expanding on the falling technique the children had already learned. In addition to the knee pads, this falling technique involved the wrist guards and elbow pads. It was important for the "postmen" to keep their hands outstretched so that the post they were holding wasn't damaged. The pupils also learned to avoid obstacles by shifting their weight.

The children learned a variety of different techniques in the subsequent teaching units. Each two-hour lesson was based around a different story. The total of six units prepared the children for inline skating in the street. And at the end there was, of course, a trip to try out what they had learned.

Safely on their way

After completing the training, the pupils knew how to brake, swerve and, in an emergency, fall. They also knew how to react quickly and safety to unforeseen obstacles. And, above all, the children were aware of the importance of protective clothing. Without it some of these exercises would definitely have been rather painful.

It is interesting to note that the training always took place in the school yard in the mornings – where it could be seen by all other pupils at the primary school. The intention was to motivate other children to wear protective clothing when using inline skates and to learn how to skate properly before venturing out into the street. The skills learned here are of particular benefit to children in their free time, when inline skating is an extremely practical and popular pastime. The journey to school, incidentally, does not count as free time. On non-project days the children were encouraged to leave their inline skates at home.

In addition to the training outlined above, it is worth looking at the traffic regulations that apply to inline skaters in the street. Mastering the skates is one thing, but behaving appropriately and considerately while using them is another. The law regards inline skates as a "special means of transport", putting skaters on a par with pedestrians. The same traffic regulations apply to both: